Hopes Crushed: It turned out that embarking on that long, treacherous 'back-way' journey to Spain and other European shores wasn't worth it after all. 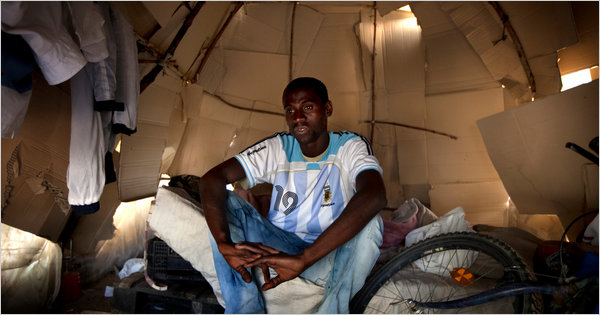 Amadou Jallow in his shelter at Palos de la Frontera. "I thought I was going to be a millionaire."

PALOS DE LA FRONTERA, Spain --- Back home in Gambia, Amadou Jallow was, at 22, a lover of reggae who has just finished college and had landed a job teaching science in a high school.

In his West African homeland, Mr. Jallow’s salary was the equivalent of just 50 euros a month, barely enough for the necessities, he said. And everywhere in his neighborhood in Serekunda, Gambia’s largest city, there was talk of easy money to be made in Europe.

Now he laughs bitterly about all that talk. He lives in a patch of woods here in southern Spain, just outside the village of Palos de la Frontera, with hundreds of other immigrants. They have built their homes out of plastic sheeting and cardboard, unsure if the water they drink from an open pipe is safe.

After six years on the continent, Mr. Jallow is rail thin, and his eyes have a yellow tinge. “We are not bush people,” he said recently as he gathered twigs to start a fire. “You think you are civilized. But this is how we live here. We suffer here.”

The political upheaval in Libya and elsewhere in North Africa has opened the way for thousands of new migrants to make their way to Europe across the Mediterranean. Already some 25,000 have reached the island of Lampedusa, Italy, and hundreds more have arrived at Malta. The boats, at first, brought mostly Tunisians. But lately there have been more sub-Saharans.

Experts say thousands more — many of whom have been moving around North Africa trying to get to Europe for years, including Somalis, Eritreans, Senegalese and Nigerians — are likely to follow, sure that a better life awaits them.

But for Mr. Jallow and for many others who arrived before them, often after days at sea without food or water, Europe has offered hardships they never imagined. These days Mr. Jallow survives on two meals a day, mostly a leaden paste made from flour and oil, which he stirs with a branch.
“It keeps the hunger away,” he said.

The authorities estimate that there are perhaps 10,000 immigrants living in the woods in the southern Spanish province of Andalusia, a region known for its crops of strawberries, raspberries and blueberries, and there are thousands more migrants in areas that produce olives, oranges and vegetables. Most of them have stories that echo Mr. Jallow’s.

From the road, their encampments look like igloos tucked among the trees. Up close, the squalor is clear. Piles of garbage and flies are everywhere. Old clothes, stiff from dirt and rain, hang from branches.

“There is everything in there,” said Diego Cañamero, the leader of the farm workers’ union in Andalusia, which tries to advocate for the men. “You have rats and snakes and mice and fleas.”

The men in the woods do not call home with the truth, though. They send pictures of themselves posing next to Mercedes cars parked on the street, the kind of pictures that Mr. Jallow says he fell for so many years ago. Now he shakes his head toward his neighbors, who will not talk to reporters.
“So many lies,” he said. “It is terrible what they are doing. But they are embarrassed.”

Even now, though, Mr. Jallow will not consider going back to Gambia. “I would prefer to die here,” he said. “I cannot go home empty-handed. If I went home, they would be saying, ‘What have you been doing with yourself, Amadou?’ They think in Europe there is money all over.”

The immigrants — virtually all of them are men — cluster by nationality and look for work on the farms. But Mr. Cañamero says they are offered only the least desirable work, like handling pesticides, and little of it at that. Most have no working papers.

Occasionally, the police bring bulldozers to tear down the shelters. But the men, who have usually used their family’s life savings to get here, are mostly left alone — the conditions they live under are an open secret in the nearby villages.

The mayor of Palos de La Frontera did not return phone calls about the camp. But Juan José Volante, the mayor of nearby Moguer, which has an even larger encampment, issued a statement saying the town did not have enough money to help the men. “The problem is too big for us,” he said. “Of course, we would like to do more.”

On a warm spring night, some of the men play cards sitting on the plastic pesticide containers and broken furniture they have collected from the trash. Some drift into town to socialize and buy supplies, if they have money. But they are not welcome in the local bars. During the World Cup last year, the farm workers’ union arranged for a truck to set up a giant television screen in the forest so the men could watch it.

“The bars don’t want them,” Mr. Cañamero said. “They say the men smell bad and they are not good for business. Most of them are Muslim, and they don’t buy alcohol.”

Mr. Jallow had his mother’s blessing but had not told his father about his plans when he left home on his bicycle in 2002, heading for Senegal, where he hoped to find a boat to the Canary Islands.

He ended up in Guinea-Bissau, where, one night two years later, he got word that a boat for Europe would leave in a few hours. There were so many people aboard — 131 — that he was barely able to move for the 11 days he spent at sea. The last five days were without food and water. Passengers were vomiting constantly, he said. The young man sitting next to him died one night, though no one noticed until the morning. His body was thrown overboard.

“A lot of us could not walk when they took us off the boat,” he recalled. “I could still walk, but it was like I was drunk. I put myself in God’s hands that he would take care of me.”

After 40 days in a detention center in the Canary Islands he was brought to the mainland and released with a standard order to leave the country. “I thought I was going to be a millionaire,” Mr. Jallow said.

His mother managed to get an uncle on the phone who said he would meet him at a train station. But when he arrived there, his uncle’s phone rang and rang. Later, he learned his uncle lived nowhere near the station. Soon, he was steered to the forest by other immigrants.

In the six years he has lived in Spain, Mr. Jallow has found temporary work in restaurants or in the fields, sometimes making 30 euros, or about $42, for 10 hours of work. He says he has made about 12,000 euros, close to $17,000, since coming to Europe, and sent maybe a third of it home. He has not talked to his family in months because he has no money.

“Times are bad for everyone here,” he said. “Not long ago, I saw my uncle in the woods. But I told him he was nothing to me."