Within the Gambian community of Michigan, Imam Alhaji Momodou Ceesay is the go-to-guy: for naming ceremonies, funerals, weddings, petty disputes between friends and within families. He is the quintessential community leader. For his community services, the Gambian Association of Michigan recently nominated Imam Ceesay for the 'Sir Dawda Jawara Peace Award' sponsored by the United African Community Organizations (UACO) during its 10-year anniversary in Michigan. (UACO is an umbrella organization representing the different African associations in metropolitan Detroit.) 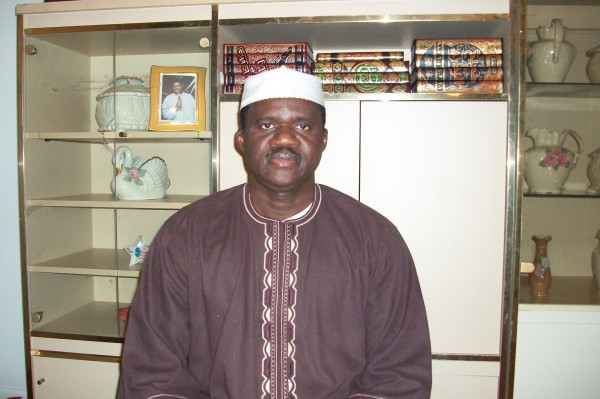 Imam Momodou Ceesay was born into a devout Muslim family in Jarra Tonia Taba, The Gambia, West Africa. He began his Islamic Studies at a very early age under the tutelage of a local Sheikh and upon graduation, he continued his studies at the Al Azhar University in Egypt, an internationally acclaimed institution of Islamic Studies.

After graduating from Al Azhar, Imam Ceesay traveled far and wide to teach and share his knowledge of Islam. In 1989, he emigrated to the U.S.A, first in New York City and in 1995, Detroit. While in Detroit, he became one of the founding members of the Gambian Association of Michigan (GAM), serving as the religious and spiritual leader of not only the Gambian community but the larger African and African-American communities. His role as a community leader transcends national and geographic boundaries because he has visited most of the world’s continents to spread the word of Islam. 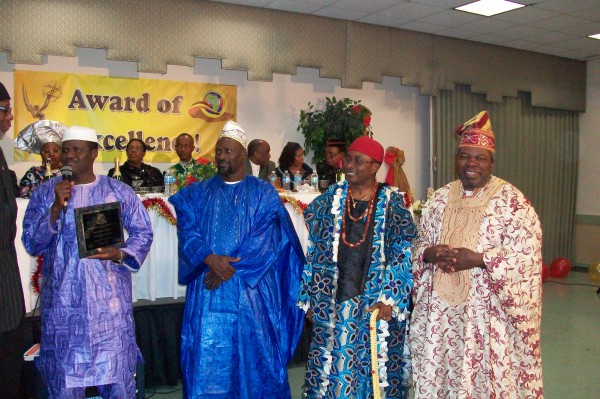 Imam Ceesay speaking at the award ceremony; flanking from right, the Malian and Nigerian community leaders

Today, he is an Assistant Imam at the Muslim Center in Detroit, but renders his services to other Islamic communities at large. His services to the community include and are not limited to, performing Islamic naming ceremonies, marriages, funerals, teaching and, partaking in Inter-Faith discussions with leaders of other religions to increase the unity and understanding among the various religious communities. He has worked with the Cardinal of the Catholic Dioceses of Southeastern Michigan, Cardinal Vigeron and he is a member of the Council of Imams of Michigan (CIOM).

In 2006, Imam Ceesay completed the translation of the Holy Quran into Mandinka and his work was approved by Islamic scholars in 2007. The translation was in response to the need for an understanding of the Quran in Mandinka - a language spoken in most West African countries. In late 2010 and early part of 2011, he played a pivotal role in the Gambian Association’s fund raising efforts for the victims of the recent devastating floods in The Gambia. When the funds arrived in The Gambia, Imam Ceesay took his time (even though he was there on a personal trip) to help co-ordinate and officially hand over the donations to Her Excellency, the Vice President of The Gambia, Mrs. Isatou Njie-Saidy. He summoned the previous president and treasurer of GAM, Modou Jatta and Jim Gaye respectively, to join the current President, Samba Johm, in the handing-over process.

Imam Momodou Ceesay is an indispensable member of the Gambian-Michigan community who is never tired of fulfilling his role as a community leader. His nomination by the Gambian Community to receive the Sir Dawda K. Jawara Peace Award was a fitting acknowledgement of his services to the entire communities he serves. There is no one more deserving of receiving this award than Imam Ceesay.

The award ceremony was attended by a cross-section of the African and American communities in Detroit. Also in attendance were Michigan State Representative John Olumba and Detroit Councilwoman Joan Watson. The awards went to several African community leaders nominated by their respective country associations. Dr. Salewa Ola, UACO's Executive Director, said the Gambian award was so named in recognition of former Gambian president Sir Dawda Kairaba Jawara's peace and democratic record for his country and the West African sub-region.

The guest speaker, Tanzanian Amina S. Ali, the African Union Permanent Representative to the United States, thanked the organisers for the invitation. She urged Africans to be good ambassadors of their continent. She said the African Union (AU) was very grateful for the contribution of the Africa Diaspora community to development programs in Africa. She revealed that the AU would be launching a big Diaspora conference sometime next year to harness development initiatives and ideas for Africa. 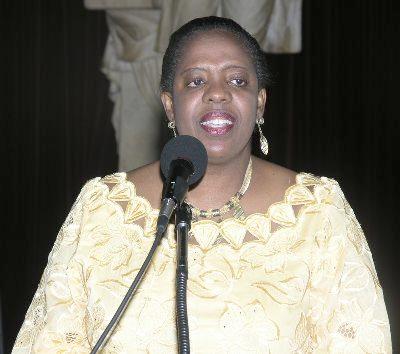 Ambassador Ali urged Africans living in the West not to abandon their cultures and traditions. She said Africa stands out in the world partly if not mainly, because of its rich cultures. She said Africans wherever they may live, should always be proud of who they are and that pride in their own languages, foods and  clothes will make them Africa's cultural ambasadors to the outside world. She said she was very pleased to see an assortment of African attire at the ceremony.

About the author: Samba Johm, the Public Relations Officer of the Basse Association, is the President of the Gambian Association of Michigan