In his book "Kairaba," Jawara comes out as a pragmatist during the push for Gambian Independence.

With countries such as Tunisia, Morocco, Ghana, Guinea gaining autonomy from colonial rule in the 1950s, demands for Independence in Africa began to take on a more widespread, ardent tone. By 1960 and the year after, all but Cape Verde, Guinea Bissau and The Gambia had gotten full Independence in the West African sub-region. Countries arrived at different Independence dates partly because of the different constitutional routes taken and partly because of the personalities and events that combined to either delay or hasten the collapse of colonial rule. But in Africa, the drumbeat for Independence had reached a crescendo in the 1960s. The ramparts of colonialism were being dismantled and buried by the shovelful. In several swathes of the continent, countries were being born anew. Then-British Prime Minister Harold Macmillan would warn his fellow countrymen about the 'wind of change' sweeping through the African continent.

Yet the domino effect of Independence would take a tad longer before materializing in The Gambia. With fellow English-speaking countries in West Africa all winning independence, The Gambia became the last one standing. Perhaps it was the quirk of fate. Or perhaps, the hurdles were steeper to climb, and hence, the belated arrival of Independence. Nonetheless, it is apt to conclude that as external realities closed in on and motivated them, the Gambian nationalists became more ambitious for theirs to also join the list of the newly-minted independent countries. But how much urgency was there? Better yet, how did former president Sir Dawda Jawara tackle the Independence issue? 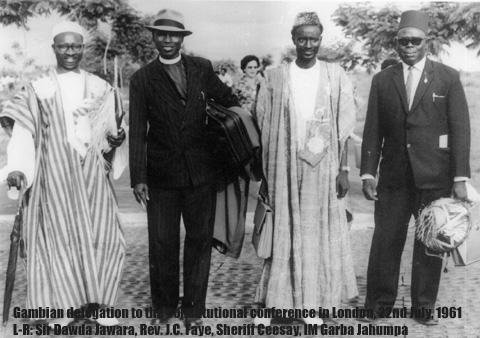 In writing about his strive for Gambian Independence in his autobiographical book Kairaba, Jawara paints the picture of a man conscious of the enormity of the task at hand but also possessed of the understanding that persistence and pragmatism needed working side by side. The narrative in the book’s chapter on Independence unmasks a consummate, dogged negotiator in Jawara. Early on, he had to fend off doubts about the framework for The Gambia’s march towards Independence from some of his fellow compatriots. In 1962, Jawara became Prime Minster; and subsequently, the colonial government would begin the process of self-rule for The Gambia. But Governor Paul had stipulated that responsibilities for defense and internal security would still remain under the purview of the colonial government until the attainment of Independence. This demand  frightened off some members of the Gambian opposition. They were leery of the colonial government’s plans for the country's future.

“The leader of the DCA the Rev J C Faye,” writes Jawara, “addressed long written treatises to me on 9 July 1963 on his fear and according to him that of the backbenchers in the House that ‘self-government’ was the colonialists’ tactic to delay independence. I wrote back to say that I did not perceive that difference in the attitude in the House and that there was really nothing to fear. Self-government, I assured the Rev Faye, was a sign that the colonial government would take us a step further towards independence.”

Jawara would not raise the DCA’s queries with the colonial governor. He instead held back, vowing to honor and work through the governor's advice to keep his plans about independence confidential until London came around the idea. Jawara was being introspective, taking stock of  the nascent trend lines pointing towards his ultimate goal – full independence. He saw ‘self-rule’ as a starting point. He was happy to take and work through it, knowing it would eventually spell the death-knell of colonialism in The Gambia. But others like opposition leader P S Njie were not so convinced. They were skeptical. “In the background, PS Njie … was deliberately absenting himself from meetings of the Legislative Council that addressed anything that sounded like internal self-government. I was however determined to see to it that such a momentous advance in the life of our country should be one achieved by a general consensus. Accordingly, I sent letters to the leader of the opposition inviting him to form with us a common front to consider the draft instruments for a proposed Order-in-Council to be presented to Her Majesty’s Government. P S Njie, for reasons best known to him, refused outright to be part of that consultation.”

Mr. Njie’s call for general elections before the attainment of ‘internal self-rule’ didn’t register well with Jawara. A meeting with the opposition was called but the United Party was no show. Its deputy leader E D Njie had cited his brother’s absence (he was on a London visit) for his party’s failure to attend the meeting.  Jawara detected some delaying tactics on the part of the opposition. “We also asked them to indicate whether or not they agreed that the multi-party consultations should take place. We could see that it had nothing to do with his brother’s absence. It was their party’s policy not to talk about independence under the aegis of the PPP government.”

On October 4, 1963, The Gambia received self-rule status. “It was the first indication to the Gambian people that we were indeed on our way to fulfilling the promise of self-determination. We declared the day a public holiday. I addressed the nation on Radio Gambia and took the salute at a march past of uniformed and voluntary units in front of the Government Wharf in Wellington Street."

For the next two years, Jawara would engage in more negotiations with the colonialists to grant full Independence to The Gambia. It would take additional trips to the United Kingdom before the process of Independence began in earnest. At the July 30 session of the 1964 London meeting, the Secretary of State for the Colonies Duncan Sundays hinted to Jawara and his fellow Gambian delegates that he had some big news to deliver to them. “The Rt Hon Duncan Sundays was in the chair. He said he had an announcement to make before the end of the conference. The United Kingdom was going to grant Independence to The Gambia. It was however sad, as I recall, that on the side of the opposition, only I M Garba Jahumpa remained in session there to hear such a historic announcement. Where were the others? They had obviously betaken themselves to other pursuits around London.”

Independence would finally arrive on February 18, 1965. Euphoria swept the young nation. “At a solemn ceremony in MacCarthy Square, in the early hours of a chilly and dew-drenched morning … the final curtain on the colonial era fell with the lowering of the British Union Jack for the last time. In its place was unfurled the red, blue, green and white colours of the Gambian flag. That momentous occasion was the final act closing more than three hundred years of our colonial experience. It was a moment, a moment I would cherish forever.”

In Jawara’s retelling of events leading to Independence, it becomes obvious, again and again, how he tackled the thorny issue of Independence: he was a consensus-builder, guided by open-mindedness and with an eye towards the inevitable. Pragmatism, more than anything else, helps describe the way Jawara comported himself during all those tricky talks about Independence. He was never confrontational; that's not his way, and he didn’t need to. The etiquettes of the negotiations and the 'tranquility' of the times did not augur for  ill-tempered dispositions, only patience and intuition, and the ability to discern undercurrents and not to disrupt the glacial movement of events. This is not to say Jawara merely reacted to rather than shaped, the events leading to Gambian Independence. He was influenced by as much as he influenced them. He just knew history was on his side. It was only a matter of time before Gambian Independence arrived. The trajectory was shooting up not downwards.

The writer is an editorial board member of My Basse. He lives in Michigan, USA.