Friends of Basse > Handing Over Ceremony of BA-Sponsored Trophies

Handing Over Ceremony of BA-Sponsored Trophies

Report on the handing over ceremony of 2 trophies, 4 footballs and cash price of D8000 donated by Basse Association to Basse Sports Committee on the 22nd June, 2010 at the Governor’s Office at 10:00am

Welcoming remarks by Pa Amat Suso, 1st Vice Chairman Regional Sports Committee. He stated that this is the first time in the history of Basse youths in the Diaspora supports sports. He thanked BA for contributing towards the development of sports not only in Basse but the entire region, because this will go a long way in the history of URR. He finally urged others to emulate BA and advise everybody to join BA including the regional authorities. After his statement the Governor and Deputy Governor paid their yearly contributions of D100.00 each, and the rest promised to pay later.

Remarks by Basse Sports Committee Chairman Foday Danjo followed. He noted BA’s support is in the right direction and timely when the committee was badly in need of help. Since the committee was elected in November, 2009, they have been trying to address issues that emerged from two previous Nawettans that resulted in numerous conflicts and disintegrated the youths of Basse. This support will further unite the youths and even the entire Basse. He thanked BA and promised that they will take great care of the materials and will put them into good use. Finally, he stated, they will continue to work and collaborate with BA in the development of sports in Basse.

Dawda Sankareh, BA’s Project Manager & Secretary General of Basse Sports Committee, lamented on the brief history of BA and its objectives. He also talked about membership contribution of BA members. He noted that BA was form by the citizens of Basse in the Diaspora last year and their objective is to contribute towards the development of Basse. He also mentioned some of BA’s projects namely, the education project supporting needy students in three schools, construction of an ablution area at Basse mosque, sports activities and plans of contributing in the health sector. 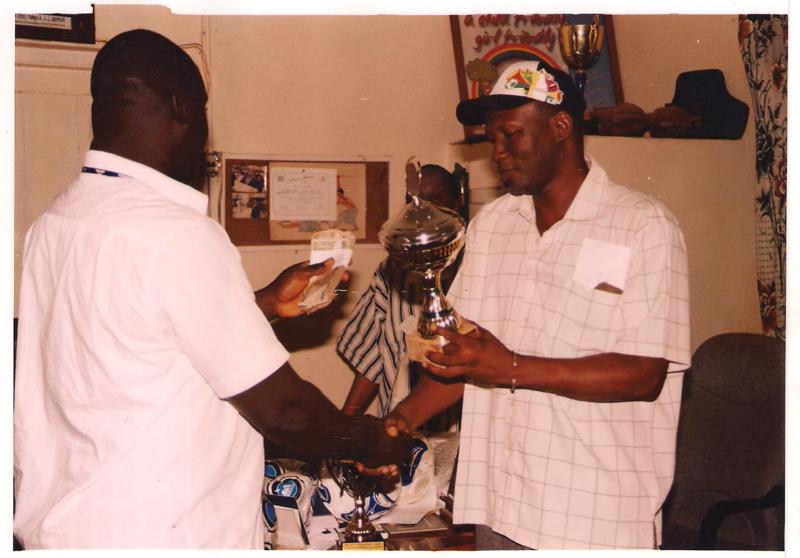 Mr Omar Ceesay, Chairman of Basse Area Council & 1st Vice Chairman Gambia Football Association stated BA is complementing the efforts of GFA in the area of football by supporting Basse sports committee. He challenged BA to work with GFA in improving football in URR. He also stated that Basse has only one first division team representing the whole region while others have more than three. He also appealed to BA to support Basse in order to establish more first division teams in URR.

Finally, with the handing over remark by the URR Governor Omar Khan, he said in the past, such as in1989, Basse used to have the best team and ultimately won BB Darboe's Trophy but, nowadays Basse cannot even win regional tournaments due to lack of unity and individual selfish interests. He further stated that if BA in the Diaspora is able to unite and think of developing Basse then, what are we in Basse undermining and fighting each other both day and night for. Finally, he said on behalf of The Gambia Government and on behalf of the President of the Gambia he thanks BA for their good gesture and have the pleasure and singular honor to hand over the materials and cash price to Basse Sports Committee.

A BIG THANKS TO EVERYBODY FOR YOUR SUPPORT