The 2010 World Cup is almost here. For hosting the tournament, Africa has much to celebrate. It underscores the world's recognition in Africa's steady progress in the game of football. It is a long way from when Africa barely knew what the sport was or from its meager number of professionals in European football markets. Today, Africa is a huge supplier of talents and skills. It is a football powerhouse. The South Africa 2010 World Cup is the ultimate proof! 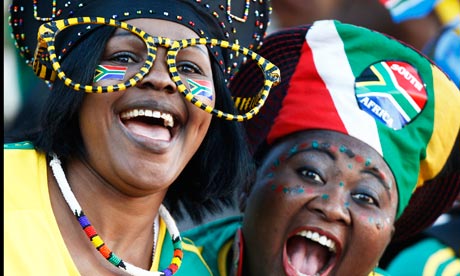 Who ever knew, some long, long years ago, that Africa would in the year 2010 host the world's biggest tournament? It was hard to crystallize what was to come later. The future can be too uncertain, too distant, to allow for a realistic appraisal of events creeping on the horizons. But mankind has never been lost on the inevitability of the necessary and of the momentous. Nothing remains the same for long. It is just a matter of when and not why. Human creativity, prodded on by the shifting demands of time, is the arch-enemy of the impossible. What was once a pipe dream, an impossibility, could overnight turn into reality, something defying believability. Like the election of Barack Obama as the first African-American President of the United States. That day was bound to come anyway. The journey may be long, but eventually the distance will be conquered and the destination will be reached. Africa took a long, hard road to get here. It was by fits and starts. Trial and error. Innovation and self-discovery.

Africa hosting the World Cup is yet another success story, another milestone in the continuum of human progress, at least, in the sporting arena. It is a recognition of the continent's accomplishments in football. And its contributions to the growth and development of the sport. Africa has come a long way. It was a difficult transition. Football was alien to the continent. It was the brainchild of the Europeans: the British, who founded the game, and the French, who established its organizational structures as in the founding of the Federation Internationale de Football Association (FIFA). Africa simply looked on with awe and from afar, as this sport took shape, gained international fame as a monetized commodity.

When football was introduced in Africa by the colonialists and missionaries, the sport was mainly meant for entertainment, something the colonialists took leisurely interest in: watching Africans with hardly any football paraphernalia flex it out on gravel and powdery grounds in the late evenings. Football in colonial Africa was beset with patronage and rampant racism. Many, many years later, African footballers would endure racist taunts and attacks at the hands of unruly spectators in European capitals. The Cameroon striker and goalie respectively Samuel Eto'o and Carlos Kameni, the Ivory Coast defender Marc Zoro and other Africans playing in Europe have had to deal with numerous incidents of racism. The problem has lessened over time thanks to FIFA's resolute stance against football racism, but thanks also to the ever increasing African presence in European professional football. Their numerical strength and impressive performances have buffeted them against some of the wantonness of European racism. Players from Didier Drogba of Chelsea to Seydou Keita of Barcelona, from Kolo Toure of Manchester City to Mamadou Niang of Marseille, have made huge runs for their respective teams. And the African participation in European competitions continues to rake in plaudits from football pundits and managers.

The Brazil legend Pele once said that the future of football was in Africa. Well, beginning June 11 and for an entire month, Africa will be the focal point of global football. All roads will lead to South Africa. The symbolism will be palpable: the world's biggest sporting event will be taking place in former Apartheid country and on the African continent for the first time. It will be a moment to savor. Some African pride will be gushing from the spectators and those watching the games around the world. Flags will be waved. National anthems will be sung. South Africa and certainly the entire African continent will brighten itself amidst the glare of international publicity and in the momentousness of the occasion. It will be Africa's moment of football glory. Hosting the World Cup is a big deal. Bigger still, is winning it.

But does Africa stand a chance? Might Pele be right after all, when he predicted some years ago that an African country would win the World Cup by the turn of the 21st century? Is this the time? Looking at the African representation at the 2010 World Cup, it is difficult to be optimistic. The African teams may not be up to a convincingly strong World Cup. The two perennial African giants, the Indomitable Lions of Cameroon and the Green Eagles of Nigeria, have not been in top forms since their forays in Italy '90 and US '94 respectively. The Elephants of Ivory Coast are individually talented, but collectively, have barely impressed. They have not done well in international competition since Secana Diaby, Omar Ben Saleh, Joel Tiehi and mates lifted the African Nations Cup in Dakar '92. The Ghana Black Stars are the most promising, but they are simply the dark horses of the African group. South Africa and Algeria are minnows, head-scratchers. But Algeria could lurch further than expected. Of all the African teams, Algeria finds itself in the "softest" group (England, Slovenia, USA). The British tabloid The Sun dubs this group "EASY": (E)ngland, (A)lgeria, (S)lovenia, (Y)anks. Of course, the paper was being prematurely jubilatory for its home country.

Perhaps, the world would be dazzled by another element of surprise from the Africans: an unexpected team defying the odds as Algeria did in '82 beating the much fancied West Germany or a team surging ahead into the latter stages of the tournament like Cameroon in Italy '90 and Senegal in Japan/South Korea '02. Yet with or without a World Cup win, it is indisputable that African football has been on the up and up. Africa has made giant strides in the world's leading sport. And for which, a fuller acknowledgment has finally arrived. The South African exhibition is arresting indeed: that the World Cup will be taking place in Africa in a few days' time. This was merely a fanciful construct many moons ago. Now we stand on the cusp of history. We have been waiting for this moment for a long time. Let's go outside and celebrate it.

Who Will Be the World Champions? Football Fans Sound Off

Ousman Kamara: Brazil. I will say this, Brazil will win! This team has the most explosive defenders not to mention their skillful scorers. Fabiano is at his best. This team has brains and brawn.

Ousainou Krubally: Spain. I am in favor of Spain, because they had very powerful team participation during the European tournament. They played 24 games as a team without losing any. That shows the potential of the Spanish team.

Mamadou Sellou Jallow: Argentina. OK, I am going for Argentina. I believe that most of their players had a wonderful club season this year. If they can transform or maintain this form, they are a team to be reckoned with. Going through the records/history, you will find out that winners of the World Cup had done extremely well in that particular season at the club level. I hope and pray that "wonder-boy" Messi will remain fit and that Argentina will be free of unnecessary cards. (South American tackles.)

Abdoulie Manneh: England. I have to say that England has the squad that is capable of lifting the World Cup. This is so because they have a well experienced coach, and players, who have been involved in all the competitive games both at home and in Europe. For instance, coach Fabio Capello has selected four players from the Premiership holders, three from Manchester United and four from Spurs, etc. All these players are physically and mentally fit for the World Cup tournament.

Cherno Baba Jallow: Germany. I think the Germans will take it this time. Why not? They have the history and the pedigree. They have won the World Cup three times: 1954, 1974, 1990. Under coach Joachim Loew, Germany went unbeaten throughout the World Cup qualifying rounds. And in World Cup history, the Germans have, most of the time, reached at least the quarter-finals. Remember the popular saying, "never write off the Germans."

Nfally "Junior" Manneh: Argentina. I am sticking my neck for Argentina becoming, for the third time, the world champions. They got the quality, the talents and the individual stars to make it to the final. Also, they have a good coach in Maradona. He was never a loser as a player with the national side. He could prove it again as coach. Good luck to Argentina!

Alhagie Jabbi: Spain. Although I would like the cup to remain in Africa, I cannot convince myself that that will happen. Therefore, I think the European champions Spain will prevail and become the world champions. In Torres and Villa, they have goal poachers. Xavi and Iniesta could kill a game with quick passes while Fabregas could come from the bench and win any game.